Home › Education › House Bill 512….update…Our reps are standing up for us

House Bill 512….update…Our reps are standing up for us

Thanks to Sarah Fowler for being such a competent and articulate representative for the Citizens of Lake County and surrounding areas.   Kudos to Lisa Woods and Meryle Johnson for also opposing HB 512.

On Tuesday, March 13, the Ohio State Board of Education passed a resolution OPPOSING HB512 and it’s massive shift of education authority from a board with elected representation to a mega-agency under the direction of ONE person appointed by the Governor. 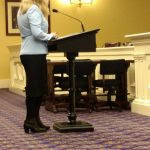