Ohio jails……wow, this graphic is revealing

This graphic was sent to us from the Center for Community Solutions.  Interesting to see the number of jails throughout the State of Ohio. 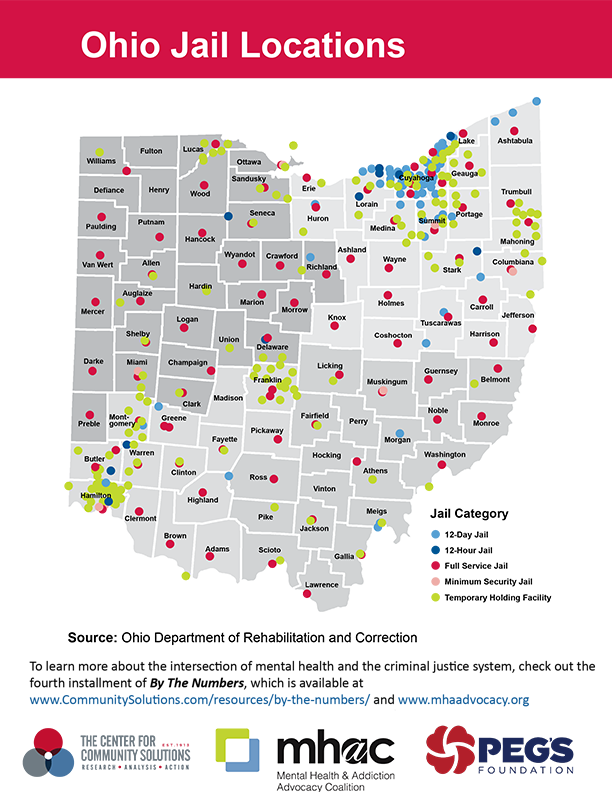 I
“In Ohio, both jails and prisons house incarcerated individuals. This report will remain consistent with
state and federal definitions when referring to both types of facilities.
Jails:
The U.S. Department of Justice (DOJ) defines jails as “correctional facilities that confine persons before or
after adjudication and are usually operated by local law enforcement authorities.”6 According to DOJ, jail sentences are typically for one year or less. DOJ notes that jails also:
• Receive individuals pending arraignment and hold those awaiting trial, conviction or sentencing
• Remit probation, parole and bail-bond violators and absconders
• Temporarily detain juveniles pending transfer to juvenile authorities
• Hold mentally ill persons pending transfer to appropriate mental health facilities
• Hold individuals for the military, for protective custody, for contempt and for the courts as witnesses
• Release inmates to the community upon completion of sentence
• Transfer inmates to federal, state or other authorities
• House inmates for federal, state or other authorities because of crowding of their facilities
• Sometimes operate community-based programs as alternatives to incarceration.

Under Ohio law, jail refers to “a jail, workhouse, minimum security jail, or other residential facility used for the confinement of alleged or convicted offenders that is operated by a political subdivision or a combination of political subdivisions of this state.”  Ohio law applies standards to jails based on their category. Jail categories include: full-service jail, minimum security jail, twelve day facility, twelve-hour facility, and temporary holding facility.

Minimum security jails generally work in conjunction with a full-service jail. They function similarly to a full-service jail, except that they have pre-requisites for qualifying incoming prisoners. Prisoners must be adults, sentenced to either traffic offenses, misdemeanors, or fourth or fifth degree felonies and must be minimum risk offenders, as defined by the Ohio Revised Code.

Twelve-day jails are primarily intended for local city, villages, and township jurisdictions. They are used for
booking and processing fresh arrests and allow local ordinance offenders to serve their jail sentences locally.

Twelve-hour jails are primarily intended for local city, village, and township jurisdictions to have a jail facility for booking and processing fresh arrests.

Temporary holding facilities can hold prisoners for a maximum detention time of six hours. These incarceration facilities do not fall under Ohio’s minimum jail standards,and instead are operated by “guidelines” established by the Bureau of Adult Detention.”