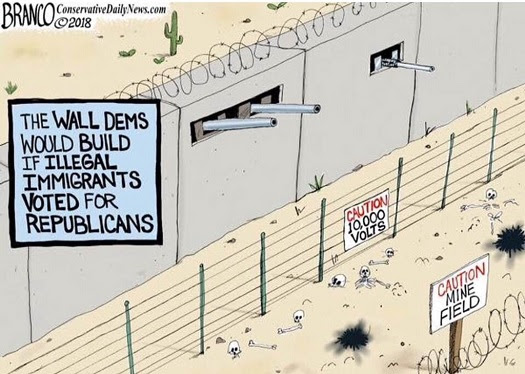 We are posting Jim Simpson’s, author of the book Red-Green Axis,  call to action on illegal immigration since it has valuable statistics on the crimes perpetrated by illegal aliens.  Liberals can continue to keep their heads in the sand, but this is real and we hope no more Lake County residents have to die because of political correctness.
*********************1776

1. Once again we need to support and message the President. Given the predictably weak knees of GOP MCs (Members of Congress), fissures are starting to form in support for President Trump over the shutdown. Of course these feckless idiots never spend a nanosecond attempting to craft any kind of media message so of course they lose the PR battle right from the beginning.

Very important. President Trump lives on Twitter. If you have a Twitter account, use it. Tweet to @realdonaldtrump with the #MAGA and #BuildTheWall hashtags. Tell him: “Declare a national emergency and build the wall! Ignore illegal court challenges! They don’t have the authority.

Here is what I just tweeted:

@realdonaldtrump #MAGA #BuildTheWall Declare a national emergency and BUILD THE WALL! Ignore illegal court challenges! They don’t have the authority. Get the DOJ to fight!

I know, don’t laugh. Getting the DOJ to just stop breaking the law will be a challenge, but you have to keep reminding them how bad it really is.

Reference my Epoch Times article on illegal alien crime.Congressional Inaction on Border Protection is Killing Americans. This report cites over 9,000 homicide convictions and over 9,000 sex offenses for which illegals were incarcerated in five states in 2015. Illegal aliens commit crimes way out of proportion to their numbers in the population.

That article cited a 2018 GAO report called Criminal Alien Statistics. This report has a ton of good info. It is the third installment in a series. Reports were published in 2011 and 2005 also. But this is the best one.

Just yesterday I received the data they used to construct some pie charts in the report for state illegal alien crime convictions. This is actual conviction numbers for identified illegal aliens — that are never included in their reports for some reason. Anyway the states must identify incarcerated illegal aliens to receive payment from the feds for holding them. It is called the State Criminal Alien Assistance Program (SCAAP).

I put together a couple of tables that update what is in the Epoch Times article and will be in my upcoming Red Green Axis book. I share them with you now:

Now, I know I have shared this table before, but the other numbers were estimates. These are exact. 9,193 convictions for murder in state prisons in 2015. 21% of the crimes committed by illegals in these states were homicide! Another 21 percent were sex crimes!! And lots of them! This is only for five states.

Following is the most interesting. This chart uses comparable state data from Arizona. No other states have data that is strictly comparable to the SCAAP data provided by GAO. This is the kind of problem analysts have when trying to use statistics. Anyway, here’s the table. Get a load. 29% of all kidnappings in Arizona are by illegal aliens! This is almost certainly a side-effect of the drug trade. In any event, MANUFACTURED CRISIS AT THE BORDER?? ARE YOU KIDDING ME??? The only manufactured aspect is Democrats’ refusal to allow us to protect America: 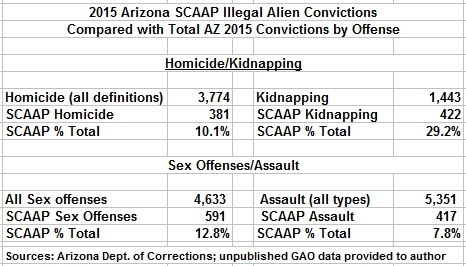 There is a great article out today where a CBS reporter interviews a Border Patrol agent, who tells her he has worked under six presidents and this is “the worst crisis I’ve seen.” Watch the video HERE. Interesting that CBS aired it and actually showed how ridiculous the current barriers are. They may be getting messages from some Congressional Democrats to give them cover to fold on the Wall. That would sure be nice.

I got the following from a Georgia Pocket member (H/T Chris O). If you’re in Georgia, contact the names listed, but this is a good message. We should all be calling, emailing, tweeting etc, our own MCs.

MIDDLE-AMERICA IS FOR THE WALL

Many of you wonder what you can do to help with the awful situation that is going on in Washington and the  mess with the Border Wall and the Government shutdown.  Well there is something you can do.  Take a few minutes out of your busy schedule to try to save this wonderful country of ours. Make a few phone calls to your Congressmen and US Senators to tell them that you are a constituent  and we expect them to work together, support our President and to BUILD THE BORDER WALL for the security of all of our American citizens. I have included some of their phone numbers below, but if this isn’t your Representative or Senator, it is easy to find their numbers on the internet.  I will tell you, they ARE keeping track  of the number of phone calls that are coming in to their offices so this is an important thing for us to do.  Pass it on to others who care. Call all numbers PLEEEZE and call often!   PUT THEM IN YOUR SPEED-DIAL