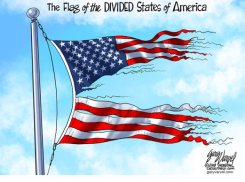 (LFC Comments:  We are committed to do our part to save our country.  We cannot, and will not, let the socialists/communists, and their useful idiots, destroy our country.  We are not only in a cultural war, but also a spiritual war.  There are patriots all over Ohio that have decided that they have had enough, and are pushing back against the evil that is spreading throughout our country. Here is a “call to action” from a patriot in Knox County.)
*********************1776

My name is Warren Edstrom board member of Ohioans United for Trump 2020.  I have lived 76 years.  I was born in 1943 during the WW2.  I have lived through the Korean War, the Vietnam War, two wars in Iraq and the current war on terror.  I have seen recessions and civil upheaval.  I have been employed and unemployed.

I stand before you a man who is watching our nation do to itself something that no outside enemy has ever been able to do, destroy my beloved country.  This is a case of national suicide.  We are destroying our country from within.  We have leaders who, at their core, want to destroy the principles of our founding fathers and establish a socialist state.  It has been said that when it is most dangerous to speak the truth is the time when the truth needs to be spoken the most.  That time is now.

Congress is on the road to transforming the United States into a Socialist/Communist state.  They want to have some faceless corrupt bureaucrat determine where we can work, how much we can make and what freedoms we will have.

President Trump has exposed the intentions of this cabal of “Swamp People” and they are trying to destroy him for it. Their hypocrisy and lies know no bounds. They wish to destroy him before he destroys them.

I fear what will happen if they are successful. I believe we will spiral down into a quagmire of corruption and state sponsored oppression under a socialist/Communist state.

In the upcoming election, we must educate the public about the things the president has done. Things the media will not talk about or report on. Because of this blatant act of propaganda against the president, we must come together to organize and educate the people of Ohio.

The opposition must not win in Ohio in 2020 and it is up to us to make sure that doesn’t happen.

Please join us at Ohioans United for Trump 2020. Together we can work to get the victory.