Thanks to the News-Herald on this article about Kirtland.  Residents may want to hold on to their wallets, because it sounds like a road levy is in your future.  Couple that with a potential school levy, and the inevitable increase in county property taxes to keep the “non-profits” functioning, and we will continue to see the squeeze on seniors staying in their homes.

Kirtland Mayor Doug Davidson says a lot was accomplished in 2018, but the new year will bring some challenges. 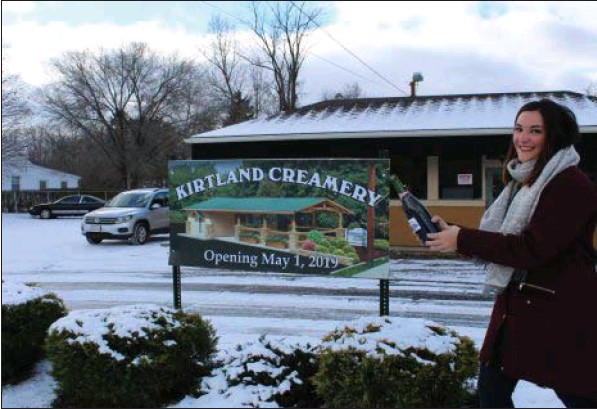 COURTESY OF LAURA TEIGELER Emily Christopher poses in front of the site of a new ice cream store coming in spring 2019. She will be operating the store.

Among the highlights from the past year, he included the city joining Willowick and Wickliffe to invest in the services of a shared economic development manager.

The concept was brought to the communities by Lake County Commissioner Jerry Cirino and Lake County Ohio Port & Economic Development Authority Director Mark Rantala. In June, Monica Drake was hired for the role.

“I believe Council saw the value in the position to help focus our economic development efforts and approved the contract,” Davidson said.

He also noted a memorandum of understanding entered between the city administration and the school district regarding protection for students. The first pact was for access to security cameras and the second clarified roles and responsibilities for all parties.

“We continue to work on additional agreements that define our school resource officer arrangements,” he said.

In addition, residents be installed in the spring between the apex of the football field and the shopping center,” Davidson said. “When used, the crosswalk will have a red light to ensure that stopping for pedestrians is more than just a suggestion.”

The new year also will bring new development along the city’s main drag. Projects include the repurposing of the old Kirtland Car Company building for the Kirtland Creamery and a new Kirtland Veterinary Hospital.

“It is probably a little premature to say ‘revitalized downtown,’ but thanks to the diligent review of the Planning & Zoning Commission and businesses willing to invest, we are improving piece by piece,” he said.

The picture isn’t all rosy for the coming year, however. Some hurdles will include replacing retiring longtime Service Director/ Zoning Inspector Carm Catania and Finance Director Keith Martinet.

“They have both served the city honorably and well for decades,” the mayor said.

“The challenge is now finding the candidates who can take us into the next 10 years.”

The budget, though stable through 2019, will require some attention with regard to addressing certain infrastructure, Davidson said.

“The administration and council will have to get together on revenue for roads, whether it’s a replacement levy that restructures some revenue for police and frees up money in the general fund or a permanent road levy, we need to clearly justify it and put it before the voters in a unified way,” he said.

The $485,000 in annual funding from the existing five-year renewal road levy isn’t enough, he added.  (LFC Comment: read: we need more tax from the citizens)

“In fact, the road study we purchased recommends an average of $1.12 million over each of the next 10 years,” to address the need, he said.  (LFC Comment: Yikes –  that is more than double what they are currently annual funding from the taxpayers.  Citizens will need to “gird their loins”, and get ready to do battle.)

Davidson hinted at infighting among city officials that may hamper efforts to deliver high quality services.

“We have to focus on attacking the problems and not each other,” he said.

“I rode along as our safety forces gave our two high school teams a little escort to the freeway this fall, on the way to their state championship games. It was great to watch the result of their teamwork and cooperation.