and makes it worse for voters!

So, earlier this week, I shared my idea suggesting that the Ohio Republican State Central Committee put out a “voter guide”, including ALL Republican candidates on the primary ballot, so that voters could have a real choice, instead of them putting out a “slate card” of ONLY party endorsed candidates. Well, we find out that the ORP State CC did act to change their endorsement policy . . . Yea, they made it worse for voters . .

The Ohio Republican State Central and Executive Committee on Friday approved a new policy on the endorsement procedure for 2020’s non-incumbent contested primary elections in the General Assembly. After an effort to table the measure failed by a vote of 10-40, the committee approved the new policy by voice vote.

Asked why it was necessary to pass this new policy, Timken said, “There’s been a debate as to whether we should be endorsing. On the one hand I think it’s the party’s job to support the candidates that the caucuses are supporting. Well, not our job, but to work with them on the candidates they’re supporting. There’s that push and pull between the two and how you manage that.”

Timken said that procedure adjustment was the only major change made in the endorsement policy. “The rest of it is pretty standard to what we’ve done previously,”
What this new move does is formalize a previously informal arrangement where the monied special interest, who fund the Ohio House and Ohio Senate Caucuses, pick the people on your ballot and then use the House Speaker and Senate President to push the ORP State Central Committee to endorse their hand picked candidate exclusively to wipe out any competition on the ballot. See, it’s not just the Ohio Republican Party State Central Committee that wants to make sure you have no ballot choice in the Primary, it is also the House and Senate Caucuses. Don’t believe me? Here are two great examples: 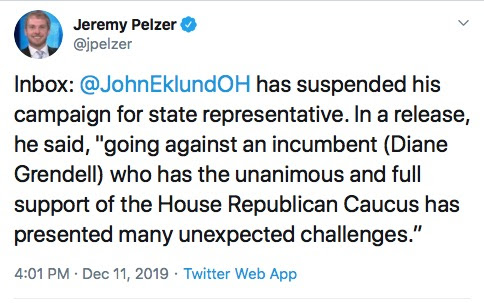 Just yesterday Ohio Senator John Eklund dropped out of the House race he intended to enter (he was termed out of the Senate) because his opponent has “the unanimous and full support of the House Republican Caucus (that) has presented many unexpected challenges.” The rumor is that those “challenges” included the House Speaker making it known to the law firm that employs Eklund that if he didn’t drop out that they may see a significant drop in state legal business. The net result is your choice on the ballot is eliminated.

Here is another example. One of our most conservative House members, John Becker, announced that he was going to run for Ohio Senate in the 14th District – until the Senate Caucus announced that they were backing another candidate in that race. So, John Becker dropped out and is running for county commissioner because he KNOWS that he cannot win the rigged game! Have fun voting for only one person on the ballot in the primary and pretending that you are choosing who YOU want!

Don’t let the part slip by in Timken’s interview where she says that they only endorse in “non-incumbent contested primaries”. See what we haven’t even talked about is that the ORP State Central Committee has a rule in their by-laws that REQUIRES them to endorse ALL INCUMBENT REPUBLICANS regardless of their voting record! Good luck getting rid of that RINO who lied to you – when they are accountable to no one but the people who pay to elect them!

You have to love the part where Timken explains the State CC relationship with the House and Senate Caucus:

Yea, the way they are “vetting the candidates” is not, as we suggested, by how the candidates views conform with the Republican Party Platform, but instead how their “views” “conform” with the legislation the monied special interest want passed by the legislature in the next session. Period. Then after they pick the candidate, they rig the primary so that only their candidate can win . . .

Notice how Timken said “I think it’s the party’s job to support the candidates that the caucuses are supporting.” She didn’t say that it was the Party’s job to recruit the best candidates possible, vet them, and let the voters choose between them as you and I would expect from the leader of a political party of which we are members. No, it’s the Party’s “job” to NOT vet anyone and just rubber stamp the bought and paid for candidates the monied special interest pay the House and Senate Caucuses to recruit who will “play ball” when they get to Columbus or DC or to your county or city. To hell with you Republican voters and Ohio Citizens. You mean NOTHING to them!

So, if you think we have a “Representative Republic” as our Federal and State Constitutions provide, you are dead wrong – because NO ONE is Representing YOU or your best interest in elected office. Some like Jim Jordan try, but they are attacked and smothered by the special interests.

Trump is the only one who can implement what YOU want because they, the monied special interests, did not fund him and he owes them nothing! That is why they, both the Republicans and the Democrats are trying to no just get rid of him but destroy him, because they can’t control him and he threatens their ability to continue stealing our tax dollars for themselves and their backers. There are not enough prison cells in the United States to hold all the criminals in Washington, DC and in our state and local governments. (But Trump would be the one to build them!)

Now you can clearly see that it is BOTH political parties who’s job it is to make sure that you don’t have a Representative Republic or a real vote. Their job is to force candidates of their choice, or more precisely chosen by the monied special interests, on you and then lie to you by suggesting that your vote counts in the primary when it does not. Your vote may count in the general election, that’s a whole other topic, but even after you “choose” in the general election those who are elected don’t vote the way you want, they vote the way their funders demand.

So, as I said in my email earlier this week, stop the charade and just don’t hold primaries. Just announce the names of the candidates your monied masters have paid for in each race and be done with it.

A political party is an organized body of like-minded people who work to elect candidates for public office who represent their values on matters of policy.

It doesn’t have to be this way. These are choices by Jane Timken and the State Central Committee and the Ohio House and Senate Caucuses. They could easily allow for competitive elections by doing a “voter guide” as we suggested and the result would be much better candidates and much better government. They could completely destroy the symbiotic pay-to-play system by having fair elections and transfer power from the rich and powerful back to the citizens and restore their personal dignity and morality – but they just can’t resist the bribes. What they are doing should be illegal, but they have been careful to change the laws to make it not so. It is certainly immoral and un-American. I would say even Un-Constitutional.

That is why our founders said that this form of government is for “a moral and religious people, and is wholly unfit for any other.” Since the people in our political “parties”, and in our government, and our elect officials are often immoral and corrupt, we cannot have a Representative Republic, we can only have the tyranny of rule by the rich “ruling class” which makes its money by feasting on the public troth of forced taxation. How long before We the People rise up and end this tyranny and choose freedom once again? We think the time draws nearer than the so called “elites” can even imagine.

For Liberty,
Tom Zawistowski
President
We the People Convention