Updated 8/12/20 at 3:00 pm
[LFC Comments: We received some negative comments from friends asking what our point was with this article.  This type of conduct happens all the time, so what is the big deal?  We thought we should offer an explanation (see end of article) to our usually well informed, red-pilled friends.]

Well, well, well, look what we have here.   It appears good old Jerry Cirino and Ohio Supreme Court Justice candidate Sharon Kennedy are BFF’s. [Best Friends Forever]   Correct us if we are wrong, but we were always told that judges are totally impartial, favor neither party, and avoid any hint of impropriety at all costs.

In fact, the very first canon for judicial conduct mandates that a judge SHALL (LFC: not maybe, or on certain occasions) uphold and promote independence and SHALL avoid the appearance of impropriety.

Canon 1: A judge shall uphold and promote the independence, integrity, and impartiality of the judiciary, and shall avoid impropriety and the appearance of impropriety.

Wikipedia: “The appearance of impropriety is a phrase referring to a situation which to a layperson without knowledge of the specific circumstances might seem to raise ethics questions.”

Good old Jerry posted this on his Facebook page: 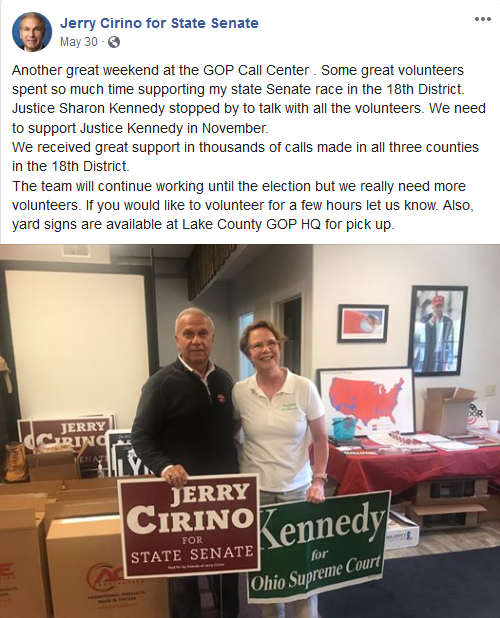 We wonder if Justice Sharon Kennedy would want a “do-over” and not align with Cirino or a party, and avoid any appearance of impropriety.  Does Cirino really want to appear promoting the idea that he has a judge under his control?

Incumbent Sharon L. Kennedy and John P. O’Donnell are running in the general election for Ohio Supreme Court on November 3, 2020.

Betsy Rader’s  and John O’Donnell’s election teams must be thanking their lucky stars for this early Christmas present.

We will try to explain to our friends why it is important that judges be non-political and impartial in their role in the judiciary.

Equal justice under the law is paramount for our Republic to function.  It is imperative that judges deciding cases will act in a neutral manner, and apply the established law rather than instilling their own bias, or having outside influences impact a given case.

It is also extremely important that lawyers pleading a case before a judge appear not to receive preferential treatment, or even a hint of special treatment from the judge.  That is why the first rule of judicial conduct deals with the appearance of impropriety.

To repeat Canon 1: A judge shall uphold and promote the independence, integrity, and impartiality of the judiciary, and shall avoid impropriety and the appearance of impropriety.

So the judges, lawyers, and politicians must try to remain separate and avoid contact outside of the court system. (That is the theory anyway)

A very common practice in Lake County is for the lawyers from both sides of the aisle to donate to the campaign coffers of judicial candidates.

The only judge, to the best of our knowledge but perhaps there are others, that does not accept contributions from lawyers or their law firm is the current 11th District Court of Appeals judge, Mr. Matt Lynch.  We can honestly say that Matt Lynch is cut above the rest, and maintains the highest standards of his profession.  He is a credit to the 11th District Court of Appeals, and the State of Ohio judicial system.

So why do the judges accept campaign contributions from lawyers?  The answer is simple – judges know that money is needed in politics to win.  Can money influence a judge’s decision?   Hmmmm, we will let the reader decide, since that decision is above our pay grade.