Better Flop to be Sold at Auction…

Thanks to our Mentor lobbyist for this information: 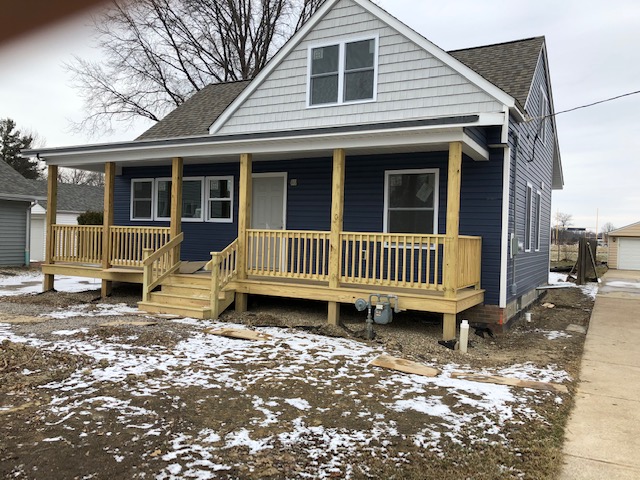 Over 1,800 people have visited the Better Flip demonstration project at 557 East 305th Street in Willowick this Summer.  They have one last weekend to tour the home.  This Saturday October 12th from 12-3 and Sunday October 13th from 1-4.
It is an opportunity for owners of 1950’s bungalows to see ideas on how to update their 1950’s floor plans as “open concept homes”.  The Lake County Ohio Port and Economic Development Authority along with the Lake County Land Bank renovated this bungalow to encourage reinvestment in the Western Suburbs.
The house will be offered at sealed bid on Monday October 21st at the offices of the Lake County Ohio Port and Economic Development Authority at 100 pm.  Bids close at noon on the 21st.
Bid packages are available at the Better Flip on the 12th or 13th or at offices of the Lake County Ohio Port and Economic Development Authority during regular office hours from 8:30 am until 5:00 pm on October 14th – October 18th.  Minimum bid is established at $ 160,000.
(LFC Comments: It is our understanding that the Lake County Land Bank gave the property  to the Lake County Port and Economic Development Authority at no cost.  The Port Authority under the direction of Mark Rantala, Executive Director, and Art Lindrose, Chairman of their Board, spent $299,000 on this project.  It is their position that any amount received at the auction under the $299,000 will be written off as marketing costs.
Commissioners Jerry Cirino and Ron Young have expressed total support for the Port on this project.  They were not concerned that the project had no budget, although Lindrose said that one should be prepared BEFORE the project was to start.  They were not even curious why the Port Board established the initial spending limit at $150,000. (the State limit to avoid competitive bidding) If this is Cirino’s and Young’s idea of being fiscally conservative, and good stewards of the taxpayer’s money, then we are not impressed.
We have filed a complaint with the State of Ohio Auditor’s office.

Side note to elected officials and bureaucrats:  When you cannot come through on the big deals for the large donors, you will be discarded like yesterday’s newspaper, and your past sins will be highlighted.  The donations to your re-election campaign dries up, the party treats you like a pariah, and retirement comes earlier than you expected. Mr. Rantala, we bid you adieu..)