(LFC Comments:  Tom Z.  provides us with the truth behind the “Democrat” Governor Mike DeWine’s motivations.  He is just another politician “feathering his own nest”.)

What is the REAL motivation for WHY Democrat DeWine has done these things:

PERHAPS THIS IS WHAT IS MOTIVATING “NEVER TRUMPERS” DEWINE AND HUSTED

DeWine, who was chairman of McCain’s 2000 campaign in Ohio, has joined House Speaker Jon Husted of Kettering as McCain’s most prominent Ohio backers in the 2008 presidential race. 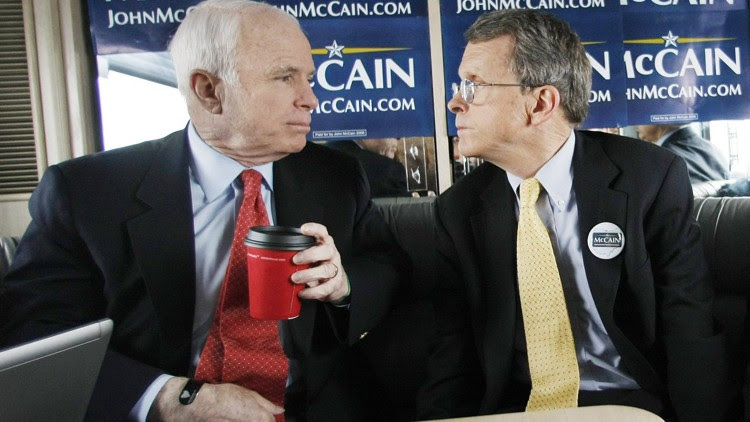 DeWine was so close to McCain that the Arizona Republican traversed northeast Ohio in 2006 to help DeWine in his race for re-election against Sherrod Brown. McCain stumped for DeWine in traditionally Democratic areas such as Mahoning County. He was greeted enthusiastically in places Republicans traditionally were usually shunned.

DEWINE COULD HAVE A SHOT AT A POST IN MCCAIN CABINET

Posted Jan 20, 2008 at 12:01 AM
Updated Jan 21, 2008 at 11:10 AM
If Republican Sen. John McCain of Arizona becomes the next president, former Sen. Mike DeWine might end up with a cabinet post, possibly attorney general, according to speculation roaring through Ohio GOP circles.
DeWine, who was chairman of McCain’s 2000 campaign in Ohio, has joined House Speaker Jon Husted of Kettering as McCain’s most prominent Ohio backers in the 2008 presidential race.
Asked last week whether he could end up in a President McCain cabinet, DeWine said, “That’s looking down the line too far. My first concern is getting him elected president. I’m sure that hasn’t even crossed his mind.”
DeWine’s 12-year run in the Senate ended in the 2006 election when he lost to Democrat Sherrod Brown, then a U.S. House member. DeWine is expected to seek elective office again in 2010, possibly governor or state attorney general. He declined to comment on specific plans beyond saying: “I’m looking at Ohio. My political future is in Ohio.”

OHIO HOUSE SPEAKER JON HUSTED ENDORSES JOHN MCCAIN FOR PRESIDENT
For Immediate Release
Contact: Press Office
Wednesday, December 19, 2007
ARLINGTON, VA — U.S. Senator John McCain’s presidential campaign today announced that Jon Husted (R-District 37), Speaker of the Ohio House of Representatives, has endorsed John McCain for President of the United States.
“We need a leader with the courage to rein in wasteful spending and more importantly, we need a Republican candidate who can beat the Democratic nominee and restore fiscal sanity to Washington,” said Speaker Husted. “I believe John McCain is that candidate and I will work to see that happen.”
John McCain thanked Speaker Husted, saying, “I am grateful for Jon’s support. His fiscally conservative leadership in Ohio, along with his business credentials, makes him an invaluable asset to the people he represents and to my campaign.”

Press Release – Top Ohio Republicans Endorse Gov. John Kasich for President
September 02, 2015
Today Ohio Gov. John Kasich announced that Ohio’s top Republican leaders have endorsed his campaign for President and are coming together to lead his campaign in Ohio. Lt. Gov. Mary Taylor, Attorney General Mike DeWine, Auditor of State David Yost and Ohio Senate President Keith Faber will serve as Co-Chairs of Kasich’s Ohio campaign team.
Ohio Secretary of State John Husted has also endorsed Kasich for President but his role as Ohio’s chief elections official prevents his involvement.
*****
Watch the Video that lays out the 5 Key things we KNOW about Coronavirus that “Brain Dead Governors” – like Mike DeWine – Continue to IGNORE that are killing Americans and our Economy!