[LFC Comments:  Linda pulls back the curtain for your to see the predators among us. Please remember to dismiss the comforting lies and embrace the uncomfortable truths.  The Communists are trying to destroy us within, and will succeed without push back.  it is imperative that President Trump be re-elected in November for the patriots to have a chance to save our republic.]
*****

A predator is defined as an animal that naturally preys on others. Predation is a natural and accepted fact of life in the wild animal kingdom – eat or be eaten is a matter of survival.

A predator is also defined as a person or group that ruthlessly exploits others. Predation is an unacceptable fact of life in the civilized world of ordered liberty and mutuality where predation is a matter of domination, not survival.

Political predators disguise their motives. No stranger ever seduced a child with spinach. Marxist political predators have been seducing American children with leftist anti-American indoctrination in public schools since 1979 when Jimmy Carter established the Department of Education. Political predators launched their Culture War war on America with a disinformation campaign promising social justice and income equality that begins in kindergarten.

Aspirations for world domination and the creation of a New World Order are nothing new. English aristocrat Lord Bertrand Russell articulated the plan for the globalist elite’s New World Order in his 1952 classic, The Impact of Science on Society.

After WWII it was obvious that America could not be defeated militarily. Our enemies did not quietly into the night, they reconstituted themselves as social justice warriors with a plan for educational indoctrination that would subvert American culture and destroy America from within. It was Bertrand Russell who explained the value of educational propaganda in the disinformation war:

It may be hoped that in time anybody will be able to persuade anybody of anything if he can catch the patient young and is provided by the State with money and equipment.

Education should aim at destroying free will so that pupils thus schooled, will be incapable throughout the rest of their lives of thinking or acting otherwise than as their schoolmasters would have wished. . . . Influences of the home are obstructive; not much can be done unless indoctrination begins before the age of ten; in order to condition students, verses set to music and repeatedly intoned are very effective. . . . It is for a future scientist to make these maxims precise and to discover exactly how much it costs per head to make children believe that snow is black. When the technique has been perfected, every government that has been in charge of education for more than one generation will be able to control its subjects securely without the need of armies or policemen.

The leftist educational indoctrination launched by Jimmy Carter in 1979 and amplified by Barack Obama, fully actuated the sinister plan of weaponizing education described by Bertrand Russell. The radical leftist Democrat war on America that begins in K-12 ends in anarchy on the streets of America today. The political predators are exploiting indoctrinated Americans and supplying them with financing, bricks, and Molotov cocktails to riot and burn America to the ground.

Political predator-in-chief, Barack Obama, sits in the shadow of the White House directing the 30,000 propagandized members of his Organizing for Action (OFA) “resistance” movement. From his bunker he orchestrates the movements of his shock troops against America-first President Trump. OFA, Antifa, Black Lives Matter, all indoctrinated with the forty-year lie of “institutional racism” are now demanding submission to their black supremacist demands.

The political predators of 21st century America use the Internet for mass social engineering to foment anarchy, race riots, and submission internationally. Anarchy is never the path to peace. It is the tyrannical weapon of political predators who instigate and finance it.

There are no laws without law enforcement. The movement to defund police departments across the country is the planned, paramilitary, tactical strategy to make America totally ungovernable. Overwhelming social chaos will bring calls for a nationalized police force run by “compassionate” radical leftist Democrats who will enforce the leftist narrative taught by Carter’s Department of Education and Obama’s Common Core. The goal of political predators is absolute power.

We have arrived at the time in our history when political predators threaten the extinction of America, our sovereignty, and our constitutional freedoms. The enemies of America are aligned in common cause to defeat America-first President Donald Trump in November. The axis of political predators including leftists, Islamists, globalists, and the communist Chinese who launched the coronavirus, are aligned in common cause to extinguish America as we know her. They do not acknowledge America’s right to exist.

If the axis powers are successful and the Democrats take power in November, the infighting will immediately begin but will not last long. The leftists, including communist organizations Antifa and Black Lives Matter, will lose their globalist funding and dissolve into a paramilitary enforcement organization similar to Hitler’s brownshirts. The foolish sycophants who support leftism and the anarchy it created will be eliminated because there is no place in globalism’s New World Order for agitators including Islamic jihadis.

America must win this war at the ballot box in November while we still have the opportunity to vote. 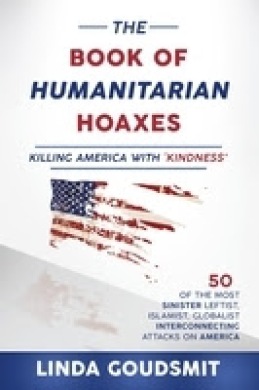 Ebook, paperback and hardcover formats can be ordered through any bookstore worldwide and are available directly online at Amazon and B&N.