Home › Corruption › F.B.I. Probe…two articles give the sordid details of the bribery scheme

F.B.I. Probe…two articles give the sordid details of the bribery scheme

[LFC Comments:  The exposure of the corruption in the Ohio of Representatives continues with these two articles.  We are not sure why the F.B.I. source had to be revealed, putting the source and his family at risk.  Unfortunately, we are seeing the  sinful nature of man being revealed.  First Energy has a lot of explaining to do.]

By Jim Provance / The Blade
Photo by Associated Press July 23, 2020

COLUMBUS — The person described in a federal criminal affidavit as providing the FBI with recorded evidence of an alleged $60 million racketeering scheme involving Ohio House Speaker Larry Householder was Columbus political consultant Tyler Fehrman, a source confirmed to The Blade.

The conservative Republican was project manager for Ohioans Against Corporate Bailouts; the signature-gathering team seeking to kill by way of a voter referendum the nuclear power plant bailout known as House Bill 6.

Matt Borges, the former chairman of the Ohio Republican Party, is accused of attempting to kill the referendum effort by bribing an individual, identified in court records as CH-1, using money obtained from Company A, believed to be FirstEnergy. The money was funneled through a non-profit called Generation Now.

Authorities say Mr. Borges was recorded describing the relationship between Mr. Householder, FirstEnergy, and Generation Now. He allegedly told Mr. Fehrman that Mr. Householder was “helping with the issue our single largest client cares about….”

Mr. Borges is accused of telling “CHS 1” that he did not know how much Mr. Householder was making off the relationship with “Company A” but the amount of money being exchanged by those involved in the dealings was “insane.”

The FBI would not comment when reached by The Blade Thursday.

On his Linked-In page, Mr. Fehrman describes himself as a “public and government relations professional with a wealth of knowledge in community organization, coalition building, communications, network and relationship building, branding, policy and legislative advocacy, team management, and strategic messaging.”

The page lists his primary interests as energy, the environment, and water policy. 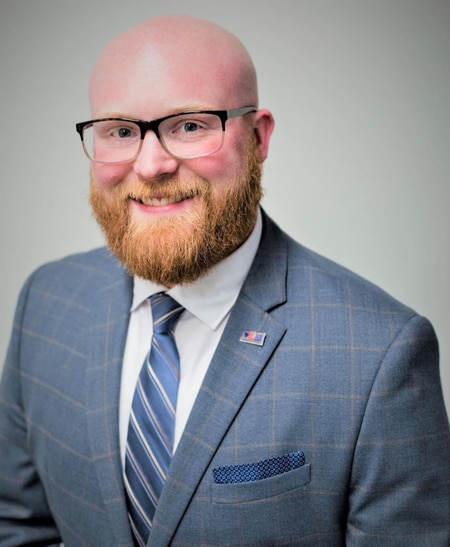 Tyler Fehrman, a Columbus political consultant, wore an FBI wire to collect evidence against ex-Ohio Republican Party Chair Matt Borges as part of an investigation into what authorities say was the largest bribery scheme in Ohio history. (Photo courtesy of Tyler Fehrman)

COLUMBUS, Ohio — In the federal complaint that accuses Ohio House Speaker Larry Householder and four allies of engineering a $60 million bribery scheme, few people come out looking good. Tyler Fehrman, though, is one of them.

Fehrman, a Columbus political consultant listed as “CHS 1” in the complaint, alerted the FBI in September 2019 after claiming his friend Matt Borges, an ex-Ohio Republican Party chair who is charged in the case, offered him $15,000 to provide inside information about the campaign to hold a referendum repealing House Bill 6. Householder pushed through the bill, a billion-dollar nuclear plant bailout, with massive financial help from FirstEnergy Corp., the beneficiary of the measure.

Fehrman later wore a wire at the FBI’s behest, recording conversations with Borges that later became a significant part of the federal case against Borges, Householder, and three others.

Fehrman, whose identity was revealed Thursday by the Toledo Blade, agreed to talk with cleveland.com about his experience in helping federal authorities expose the scheme.

In the interview, Fehrman said he felt compelled to do the right thing, even though he described Borges as a “close friend” and a “mentor.” When Borges went to the 2018 Super Bowl, he brought Fehrman – a New England Patriots fan – back a Patriots hat.

Fehrman, who previously managed races for a couple of pro-Householder legislative candidates, was unemployed and in debt last summer. When he was offered a job last year as a Central Ohio regional manager for the referendum campaign to overturn House Bill 6, he said Borges encouraged him to take it.

But soon after Fehrman accepted the job, he said, Borges called him and asked to meet for coffee.

“Never did I ever think that Matt was going to put me in the position that he did,” Fehrman said. “One of the first things he told me was, ‘Dude, I don’t have a mortgage anymore. Like, I’m so taken care of. And we could do the same for you.’”

Fehrman continued: “I just remember my stomach sank. …Immediately, I thought, what a terrible choice. But I also thought, you know, this guy is my friend. He’s trying to give me an opportunity because he cares. It didn’t take long to realize, though, that he wasn’t trying to help me. He was preying on my vulnerabilities that he only knew because we were close friends.”

According to Fehrman and the federal complaint, after the meeting, he texted Borges that he wasn’t interested, writing, “I can’t put a price tag on my integrity or my word.”

Borges wrote back that he understood, adding that Fehrman shouldn’t tell anyone they spoke, he said.

Fehrman then called a friend who connected him with the FBI. Agents contacted Fehrman the next day and encouraged him to call Borges back and feign interest in the offer so he could gather evidence for them.

“I would like to tell you that my immediate answer (to the FBI), was, like, ‘Yeah, of course, that sounds great,‘’ Fehrman said. “But it took me a few minutes because it was like a gut punch. I recognize that this is a guy that has a young daughter. He’s got a family, and we were friends.”

After thinking it over, Fehrman told the FBI he would do it. He met Borges again on Sept. 10 – this time, wearing a wire.

“I was terrified. I cannot tell you how unsettling and abnormal and strange it feels to be in that situation,” he said. “I felt on edge, knowing that I had to go in and sit down and interact with (Borges) the same way I would normally as a close friend.”

On Sept. 13, Fehrman again met with Borges, who handed him a check for $15,000 — funded entirely with FirstEnergy money, according to the complaint. Fehrman, who used to work for ex-Gov. John Kasich, said Borges told him the money was for him to organize a reunion of former Kasich staffers.

But starting the very next day, Fehrman said Borges began asking him for inside statistics on how many petition signatures the anti-HB6 referendum organizers were collecting.

“I was hoping my phone would ring and he’d go, ‘Hey, now we can start on the staff reunion,’” Fehrman said. “It’s clear now that was not the case.”

Toward the end of the Sept. 13 meeting, Fehrman — who was again wearing an FBI wire — said Borges warned him, “You better not be screwing me” and that he hoped Fehrman was not secretly recording their meeting for the Columbus Dispatch.

Fehrman said he answered, “I’m not recording anything for the Dispatch.”

As the two were getting up to leave, Fehrman said Borges looked at him and said, “Seriously, though — if you’re ****ing with me, we’ll blow up your house.”

The federal complaint states that Fehrman treated the comment as a joke. But Fehrman says he didn’t consider the remark funny at all.

“I remember getting in my car and just feeling my heart sink,” he said. “I played it off as a joke, but I was already scared — and that terrified me.”

Fehrman said that while he took no joy from his part in the investigation, he would do it all again.

“It’s the right thing, because the people of Ohio deserve better than to have corrupt politicians and lobbyists and political hacks stealing their taxpayer dollars to bail out a corporation and line their own pockets,” Fehrman said.

“I’ve got a 7-year-old daughter who I adore, and I want the world that she grows up in to be a good one,” he added. “And I want leaders who don’t get away with things like this.”